The following article by Michael Ward of Swansea University was originally published by The Conversation. 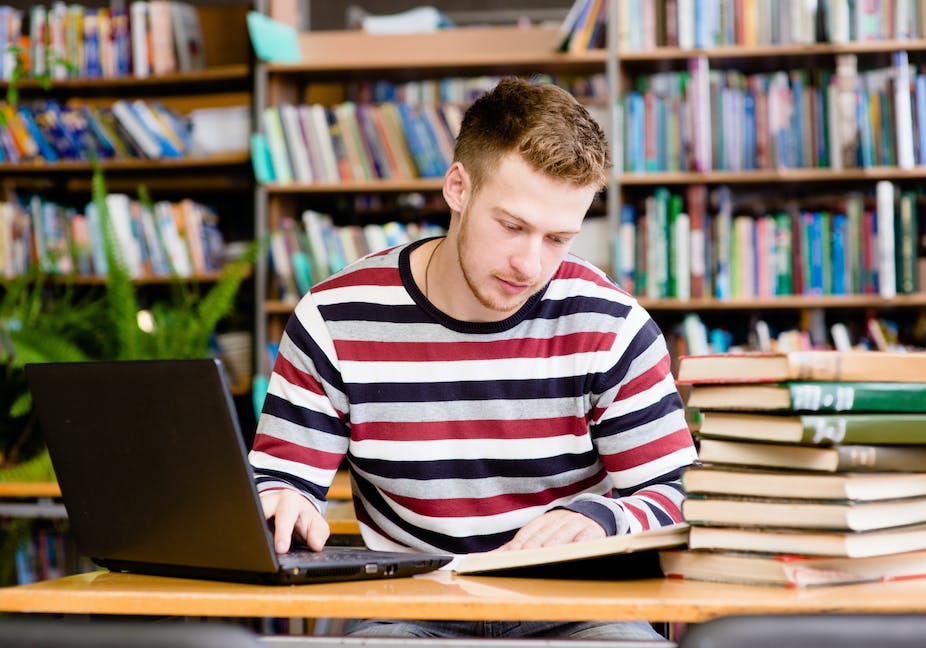 A hard working ethic can make students stand out for the wrong reasons. Ermolaev Alexander/Shutterstock

Whether it is high rates of suicide and mental health problems, a lack of appropriate role models, absent fathers, access to secure employment, drug and alcoholic dependency, men – when compared to their female counterparts – are often reported to be in trouble.

Concern has also centred on boys’ supposed educational “underachievement” – and an idea that they suffer from what some have called a poverty of aspiration or a poverty of expectation. Yet, as I and sociologists have written before, this so-called underachievement isn’t the same for all boys – neither is it the fault of schools alone.

Considering the arguments raging about the UK Higher Education sector at present and the ongoing tuition fees discussions, it is important now, more than ever, to acknowledge the roles universities play in this debate.

My research, carried out over the past ten years – resulting in a recently published book – suggests that for young working-class men who are academically successful, financing and getting into university is only the start of the battle.

For two and a half years, I visited a post-industrial community in south Wales, interviewing and generally “hanging out” with a group of young men during their final years of secondary school. A small group of these achieved very high grades and saw university as the next logical step.

One young man I’ll call “David” told me that he had looked at different universities and had prioritised those he felt would give him the best chance of future success and opportunities to work in the film industry and visit America. He’d applied for Oxford and attended a preparation day event in Bristol to give him the best chance of being selected. However, his interview at Oxford was unsuccessful and he was not offered a place. When we talked about it later and how useful this preparation day had been, David told me that his strong working-class Welsh accent was a real disadvantage.

I could hear myself, everyone was really different is the best way to put it. They spoke, you know, with that really intelligent sounding non-dialect accent. At one point they said, ‘do you want to speak in front of the group’ and I said ‘no I don’t’.

It wasn’t just the accents which marked him out, David also felt that his experience of school and working together with his classmates had disadvantaged him.

There it was dog-eat-dog, you just look after yourself, and there everybody was [puts on an upper-class accent] ‘I’m very smart, listen to me’.

While the journey to university is a challenge for young men like David, other problems also appear for young men from working-class backgrounds once they are there. In one of my interviews in Canada with young men who were the first in their family to go to university, “Alex” told me, he didn’t have many friends, he found his professors patronising and his hard studying ethic marked him out as different from his less studious peers. 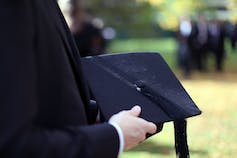 Graduation can be a hard won thing. By J. Henning Buchholz/Shutterstock

Alex’s desire to succeed came from his experience of working in what he termed “one terrible job after another. Gas stations, coffee shops – nothing that I could ever move on from”. After a few years of this, he’d really had enough and come to the realisation that “this type of experience doesn’t lead to something better, it’s shitty. When you have this skill set, the only type of places that are going to hire you are these places. Getting locked into it, is like a death sentence”.

His working-class credentials made him stand out while at university, but his experience of higher education made him also feel out of place when he returned to his home community during the holidays. He explained that men from his community worked in lumber yards and paper mills, the local factory and prisons. Going to university was an alien concept for many and, just by attending, he marked himself out as different and didn’t feel part of either world.

The working-class “achieving boys” I have met, have often had to adopt a hybridised form of masculinity, forced by economic circumstance to escape their roots, but when they return to their home communities, they can feel further out of place. The implication of this on their ability to be successful is important and shows how much harder working-class boys must work than those from more privileged backgrounds to achieve in different aspects of their lives.

For young people like David and Alex, the decks it seems are doubly stacked against them.

Though my research has focused on speaking to young working-class men, working-class women face similar and other issues purely because of their class status. Regardless of gender it is clear that working-class students are being unfairly marked purely by a label which has no bearing on their educational achievements.