Flow of the Greenland Ice Sheet is likely to speed up in the future, despite a recent slowdown, because its outlet glaciers slide over wet sediment, not hard rock, new research based on seismic surveys has confirmed. This sediment will become weaker and more slippery as global temperatures rise and meltwater supply becomes more variable.

The findings challenge the view that the recent slowdowns in ice flow would continue in the long term.

The research, published in Science Advances, was led by Professor Bernd Kulessa, a glaciologist at Swansea University, and involved experts from the UK, Canada, Sweden and Norway.

Picture: a shaft in the glacier - known as a moulin - which transports meltwater from the surface to the base of the glacier.  Credit C F Dow.

Previous research has identified two possible mechanisms for controlling the speed of the ice flow.

The first is self-regulation, which proposes that glaciers slow down at the end of the summer because large networks of channels drain water away at the base, increasing frictional resistance to ice flow.

The second is to do with the soft sediments that recent research has shown underlie glaciers; in this model, changing patterns of water flow alternately weaken or strengthen the sediment, making it more or less slippery, and thus enhancing or decreasing the speed of ice flow.

The team’s aim was to test the sediment theory for the first time using measurements on the ice sheet.

They carried out seismic surveys at a surface lake on the Greenland Ice Sheet, where the ice is around 1.2 km thick.  This involves using a series of controlled explosions to send acoustic waves through the glacier, which then bounce back to a series of geophones –small microphones - set up on the glacier. The data are then analysed to delineate and characterise the physical properties of the sediment underneath the ice.

WATCH:  Dr Adam Booth from the research team carries out a controlled explosion in the ice, as part of the seismic survey  (Credit C F Dow) 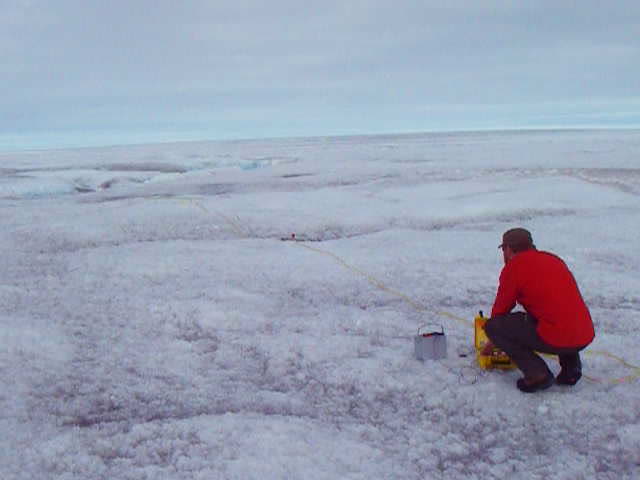 The team's seismic observations confirmed that:

Professor Bernd Kulessa of the College of Science at Swansea University, lead researcher on the project, said:

“Greenland’s margin has many outlet glaciers that act as fast conveyor belts of ice. Thousands of surface lakes act as taps that deliver meltwater to the ice base, turning it into a slippery bathtub.

Because it is difficult to see beneath them we surmised until recently that the glaciers slip over hard rock, but we realise now that they often slip over sloppy wet sediments instead.

In a warming Arctic climate more ice will melt and make the sediments even sloppier and more slippery, so that fast ice flow can occur long into the future.

This discovery leaves us concerned because we have so far accepted the exact opposite – that Greenland’s icy conveyor would slow down.”

The research paper is called “Seismic evidence for complex sedimentary control of Greenland Ice Sheet flow”.  It is published in “Science Advances”.

The team included researchers from Swansea, Aberystwyth, Leeds and Cambridge universities in the UK, and from the Arctic University of Norway, the Norwegian Polar Institute, University of Waterloo (Canada) and Uppsala Universitet (Sweden).

Find out more about the College of Science at Swansea University