Christmas nostalgia is something to be wary of, according to literary greats

The following article written by Nick Taylor-Collins, of the College of Arts and Humanities, was originally published by The Conversation. 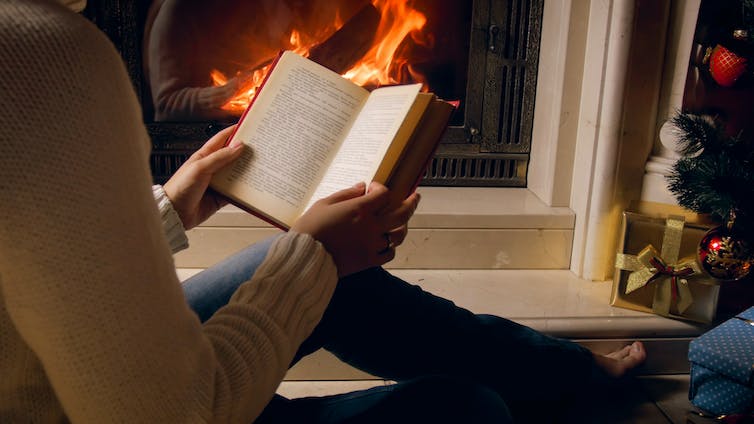 “The story had held us, round the fire, sufficiently breathless,” starts Henry James’s 1898 novella The Turn of the Screw. Though an ultimately “gruesome” tale of ghosts, this is “Christmas Eve in an old house”, and everything is as it should be.

Christmas has long been a time for telling tales around the lively warmth of the fireside, as the narrator does in James’s tale. Nowadays James’s and Charles Dickens’s stories are substituted by John Lewis’s vignette of Moz the kindly Monster and Vodafone’s love story all about data packages (no, really). But each of these share at some level a common romanticisation of youth, in which our childhood memories, homes and bedtime stories are restored and revitalised.

But is this misty-eyed view of Christmas past any good for us? Or does nostalgia get in the way of what we should be enjoying in the moment?

Leaving the past behind

In James Joyce’s short story The Dead (1914), protagonist Gabriel Conroy wrestles with such questions. At a Christmas party hosted by his aunts, Conroy rejects the community in Ireland that seeks to revive the Gaelic language long dead and long gone – a language that might, if effective, forge Ireland as a nation independent of Great Britain.

But “Irish is not my own language,” he tells his dance partner, Miss Ivors. “O, to tell you the truth … I’m sick of my own country, sick of it!” Conroy reviles this backward-looking, false inventiveness which says that the Irish language is the keystone to a modern Ireland.

For Conroy this nostalgic view is painfully shortsighted. Instead, he tells his family and companions that the past they should be looking to is not mythical, but their parents’ and grandparents’ whose lived-in and real Ireland is rapidly disappearing.

I fear that this new generation … will lack those qualities of humanity, of hospitality, of kindly humour which belonged to an older day.

The spirit of the season? Pozynakov/Shutterstock 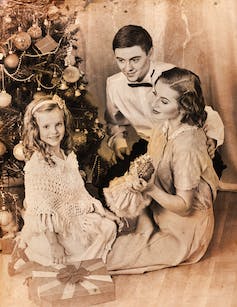 Nostalgia has a complex etymology. The first part stems from nostos, meaning “homecoming” in ancient Greek, which was a heroic quality desired by Ulysses in The Odyssey. That epic poem charted Ulysses’ return to Ithaca after the Trojan War. But the second half of the word, algia, means “pain”. The word as a whole implies the “painful homecoming” – the difficult journey – the return home that’s not without trouble.

This pain holds true for Conroy on that Christmas party night. On his journey to his hotel for the night, he learns of his wife Greta’s past when she tells her own story about a former lover who died. Asked by Conroy why the man died, Greta replies simply, “I think he died for me”. This past and its intrusion into Conroy’s present-day Christmas throws him into disarray. He is confused as to why Greta would not tell him everything about her past. Sadly this homecoming proves painful. Neither a backward glance to the mythic Ireland with its Gaelic heritage, nor the reversion to the generation which is dying all around, can soothe Conroy’s Christmas.

To counter the kind of sadness that Conroy feels, today’s stories on the big and small screens focus on memories we cherish from those days when we didn’t know the truth about Father Christmas. The rose-tinted glasses demand ever-sweeter stories of times when Christmas brought our desires home for us. The true meaning of nostalgia, with its necessary pain, has been forgotten in our late capitalist society in which commodities overrule memories.

The 19th century poet, Alfred, Lord Tennyson, also wondered about nostalgia. In his poem, Ulysses (1833), he questions whether the hero’s return home to Ithaca would have made him happy. In the poem, the raging fireside common to Christmas stories is instead for Ulysses a “still hearth”. To get over the nostalgia he feels (in the strictest sense), he rejects the life spent doling out

Unequal laws unto a savage race

That hoard, and sleep, and feed, and know not me.

Ulysses decides to “to sail beyond the sunset” one more time. Why? “To strive, to seek, to find and not to yield.” Ulysses rejects nostalgia in place of living the real life that Conroy also cherished.

Conroy matches the epiphany of Tennyson’s Ulysses. His decision, however, is not to escape, but to engage with the past on its own terms. Joyce writes:

Other forms were near. [Gabriel’s] soul had approached that region where dwell the vast hosts of the dead. … His own identity was fading out into a grey impalpable world: the solid world itself which these dead had one time reared and lived in was dissolving and dwindling.

Gabriel meets the souls of the dead people he’s saluted, and is hospitably welcomed into their community. His nostalgic pain is finally soothed as “his soul swooned” to be part of something larger than himself, to have company on that snowy night.

Perhaps, then, we should no longer resist the painful homecoming that nostalgia truly entails. Instead, that pain we feel as we reminisce about the past – especially round the fireplace at Christmas – provides an opportunity: to strive, to seek and to find a new adventure.